We Will Have to Find a Place to Meet

In 1974, the Argentinean artist and intellectual Oscar Masotta (1930-1979) went into exile in Europe. Settling first in London and then in Barcelona, he organised Lacanian psychoanalysis study groups, as he had done in Buenos Aires. In Barcelona, Masotta taught his first seminars in the studio of the artist Josep Guinovart. Artists such as Pepe Espaliú and intellectuals of the standing of Alberto Cardín, to mention but two examples, took part in these seminars, demonstrating Masotta’s importance on the Barcelona cultural scene in the post-Franco years. This project is framed in a personal and professional quest of Cloe Masotta. In August 2016, she travelled to Argentina with the filmmaker Andrés Duque to do a series of interviews for the exhibition Oscar Masotta. Theory as Action, curated by Ana Longoni. After 17 years without setting foot in Buenos Aires, Cloe Masotta went to the house where her father had spent his childhood. There she found a box full of letters written by her father to his mother (her grandmother) when he was already in exile. The publication Haurem de trobar un lloc on trobar-nos charts Oscar Masotta’s intellectual career, as well as his life in Europe, through these letters and the marks he left in the books he was reading while he was writing. 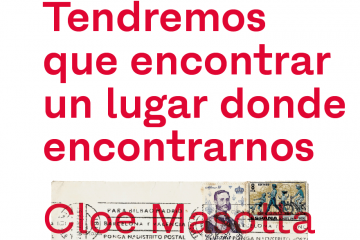 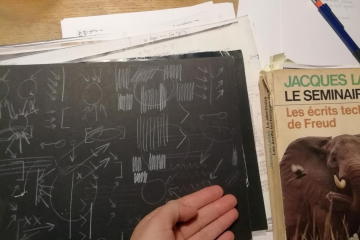