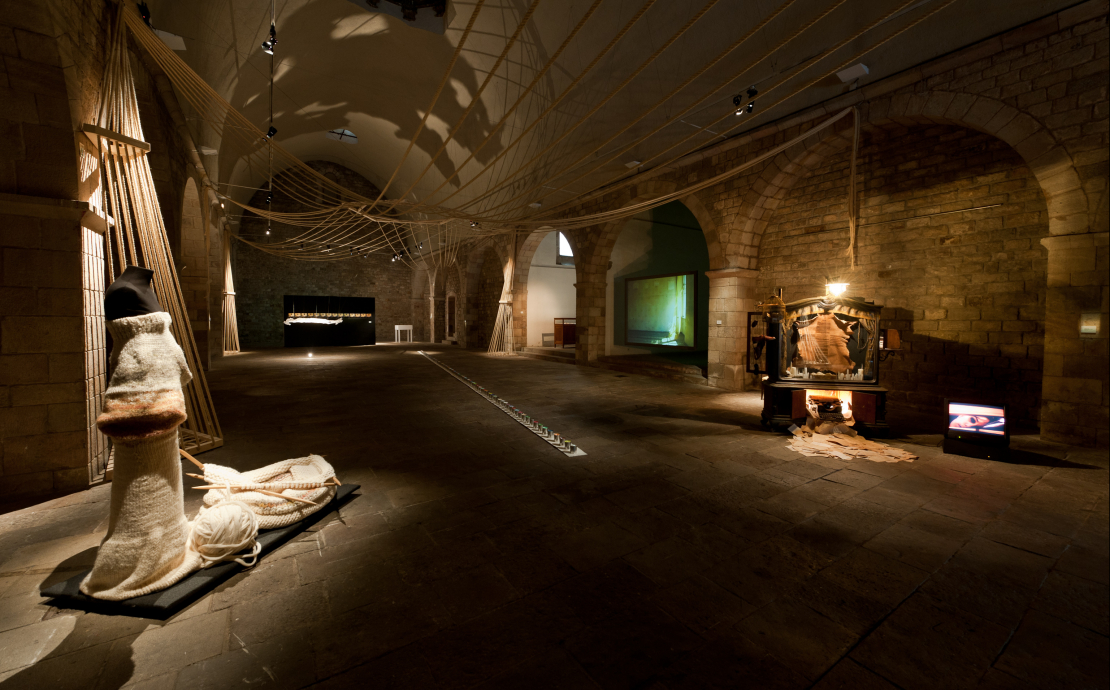 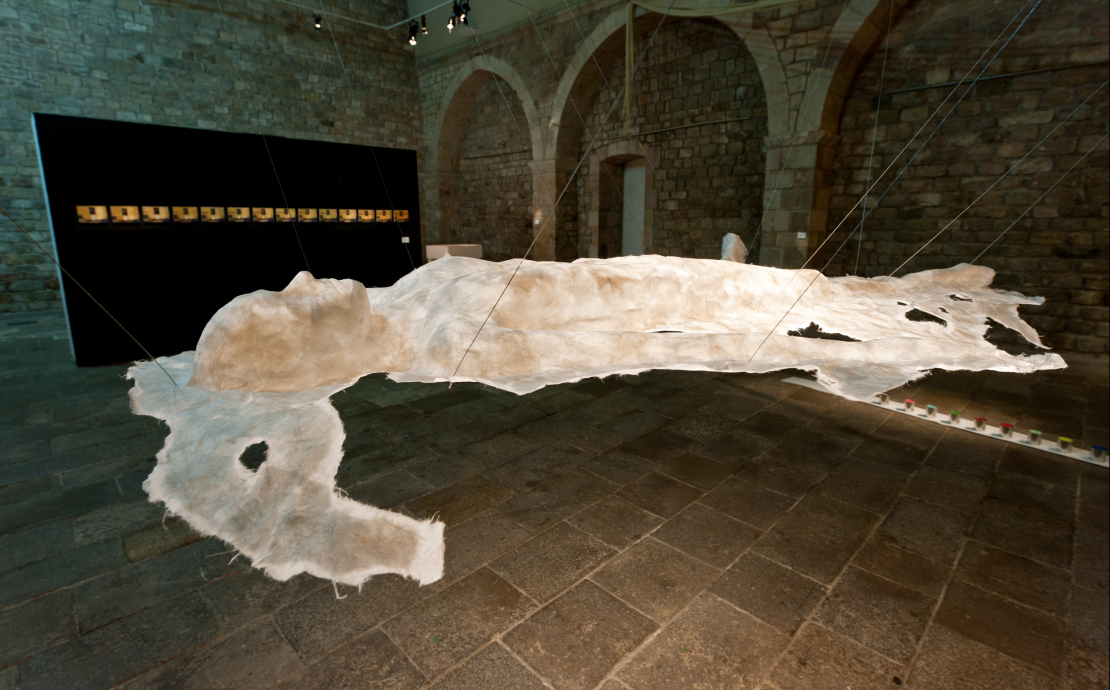 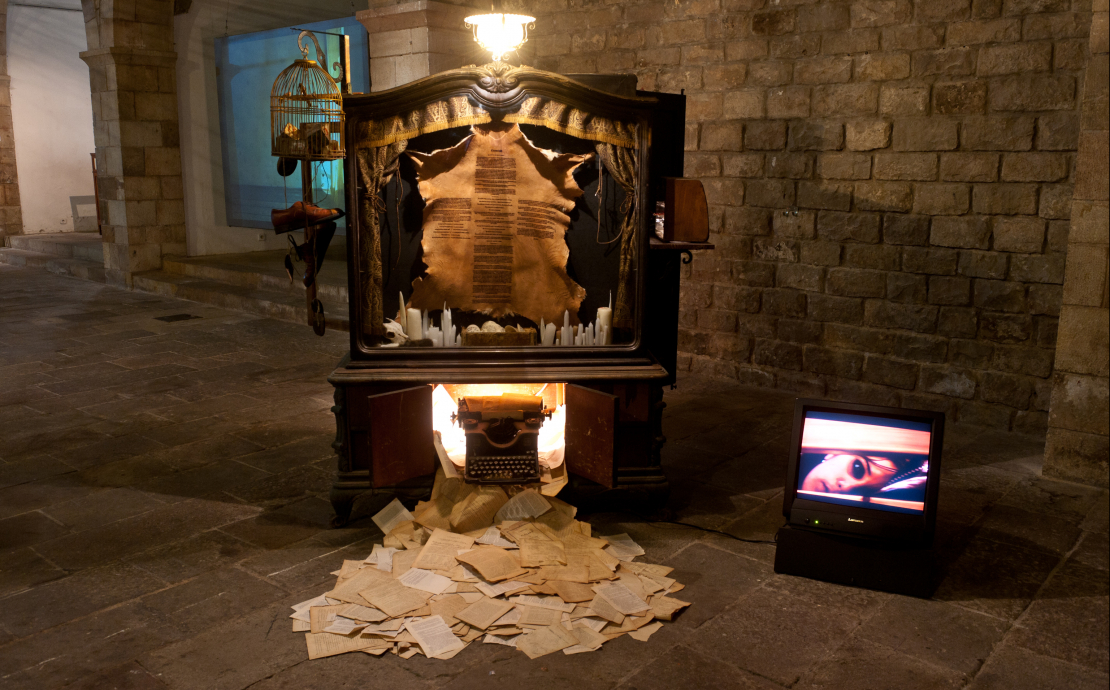 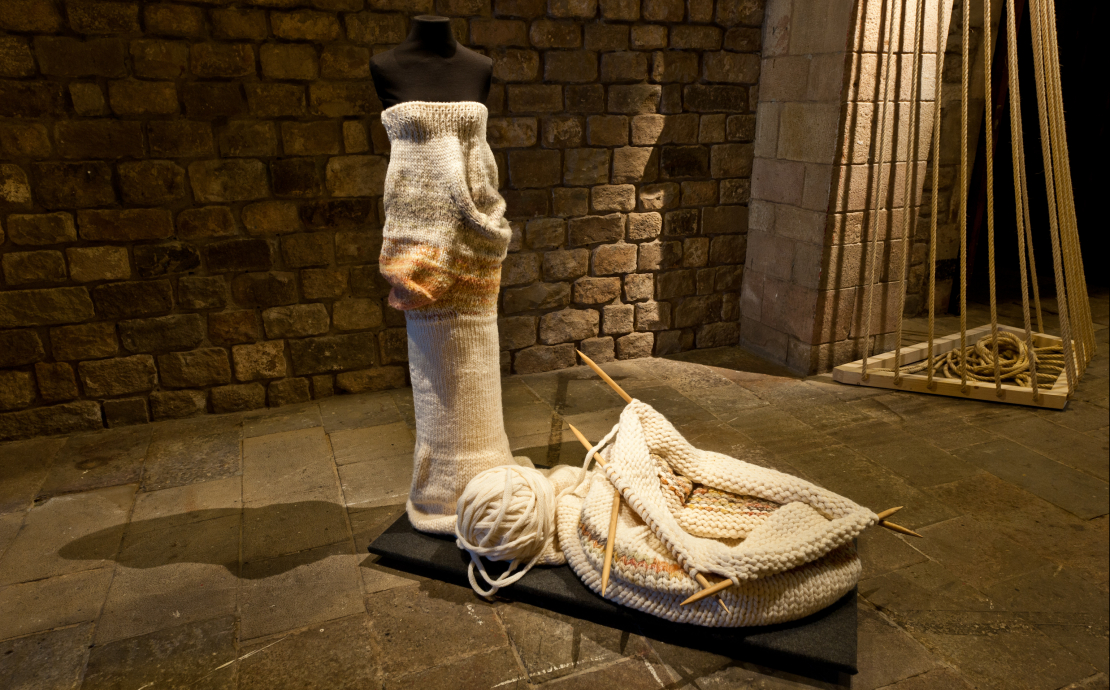 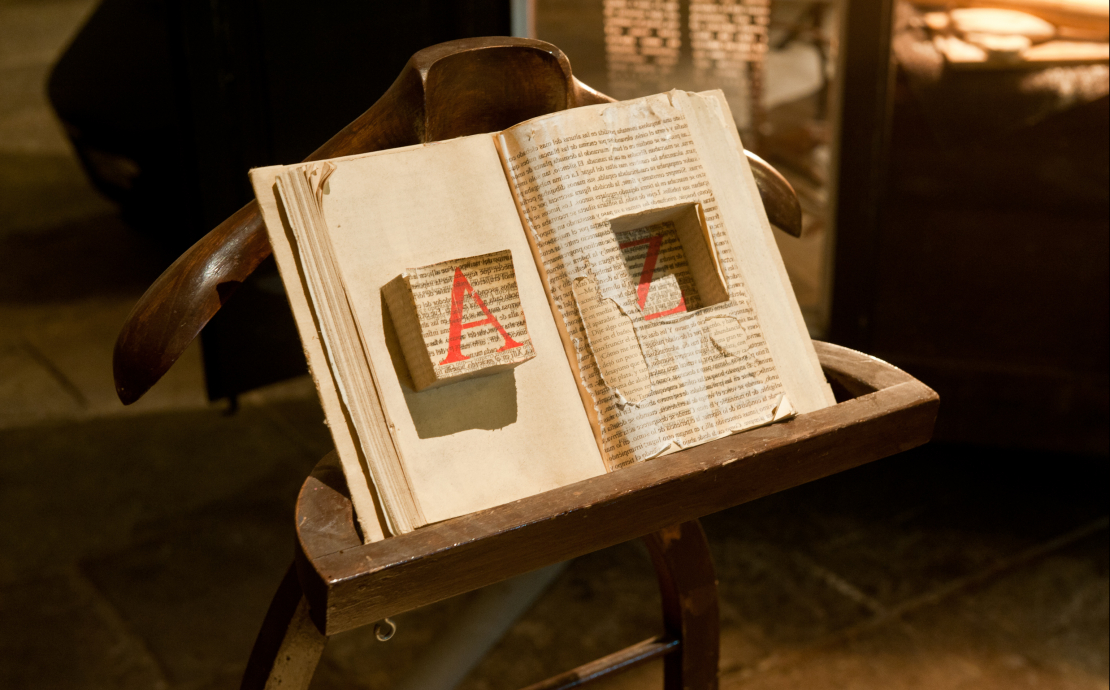 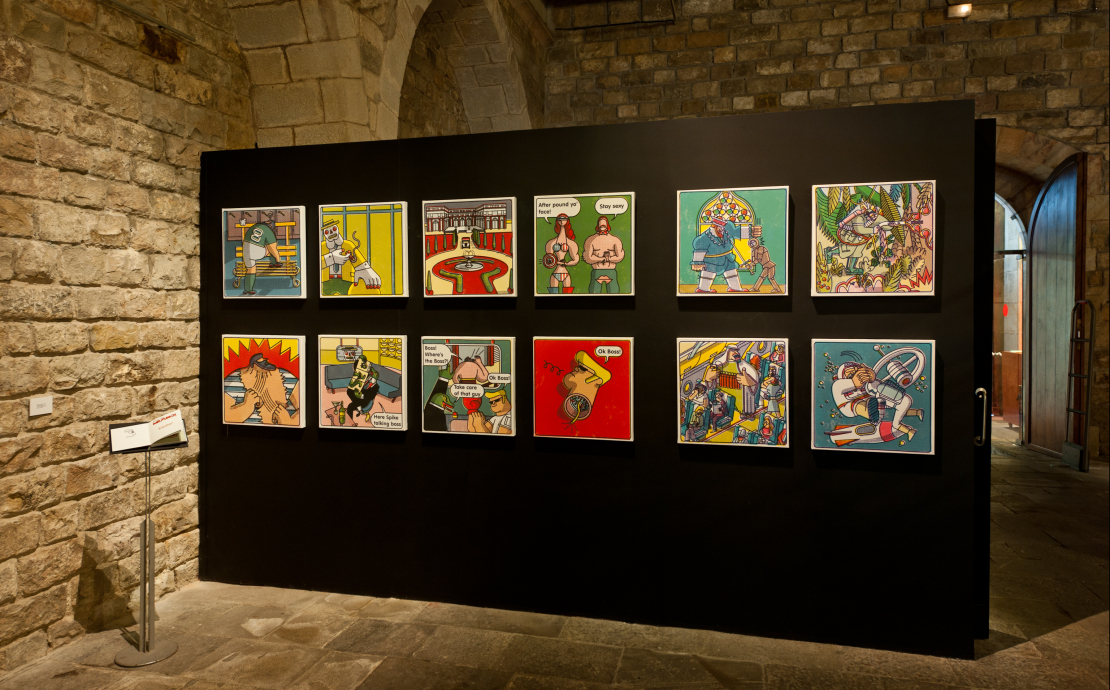 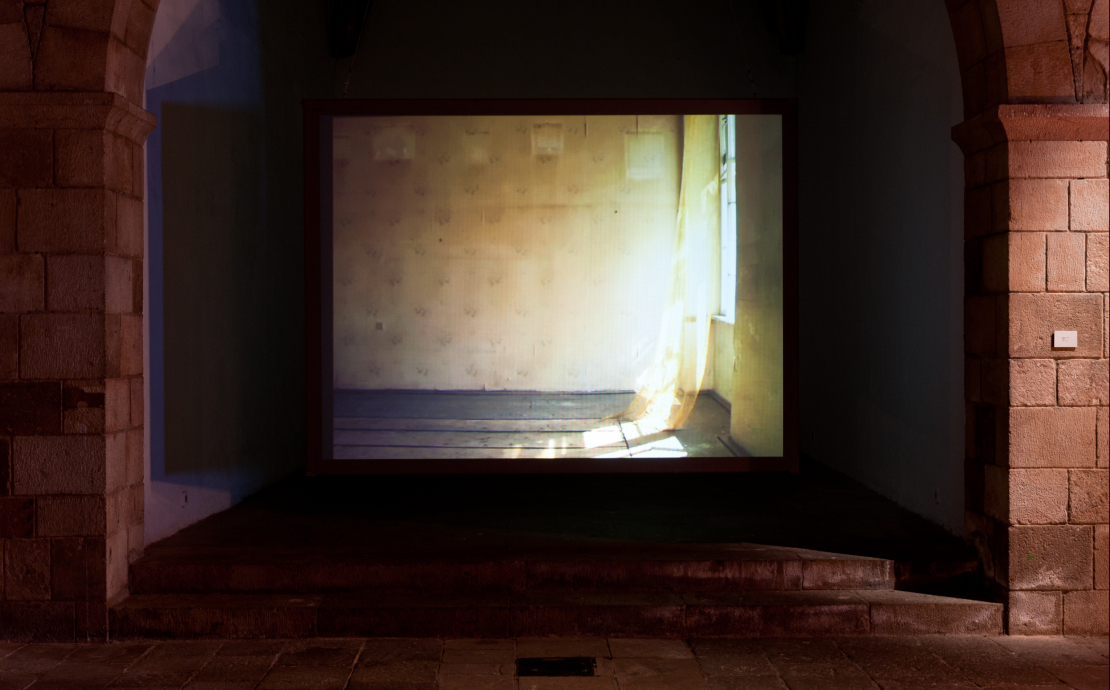 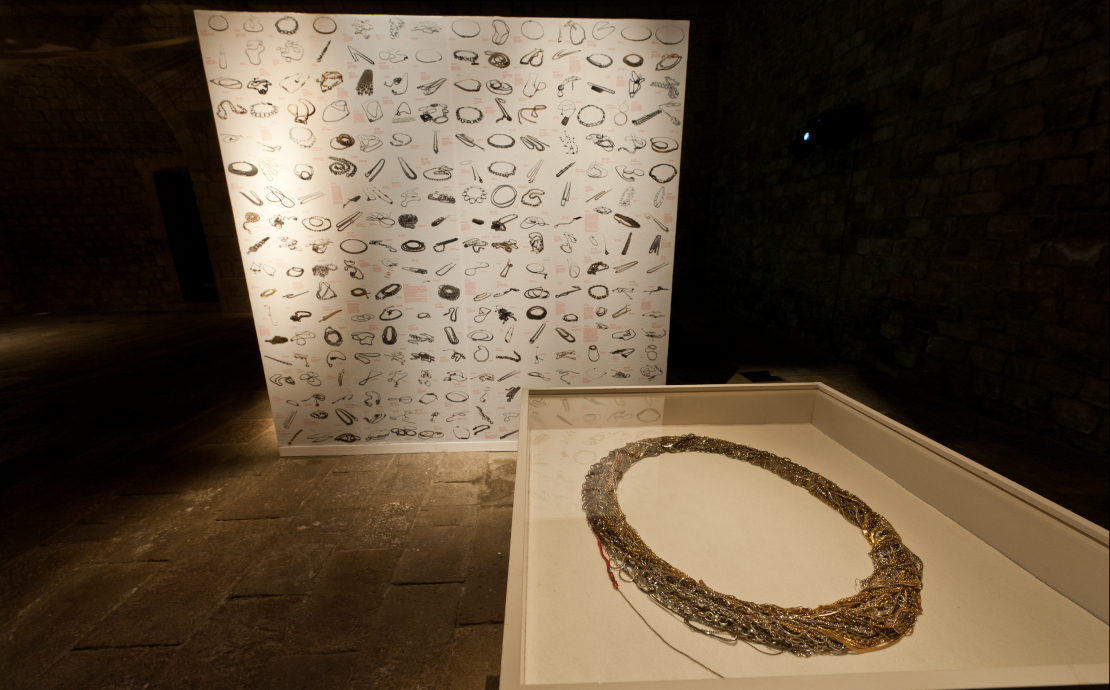 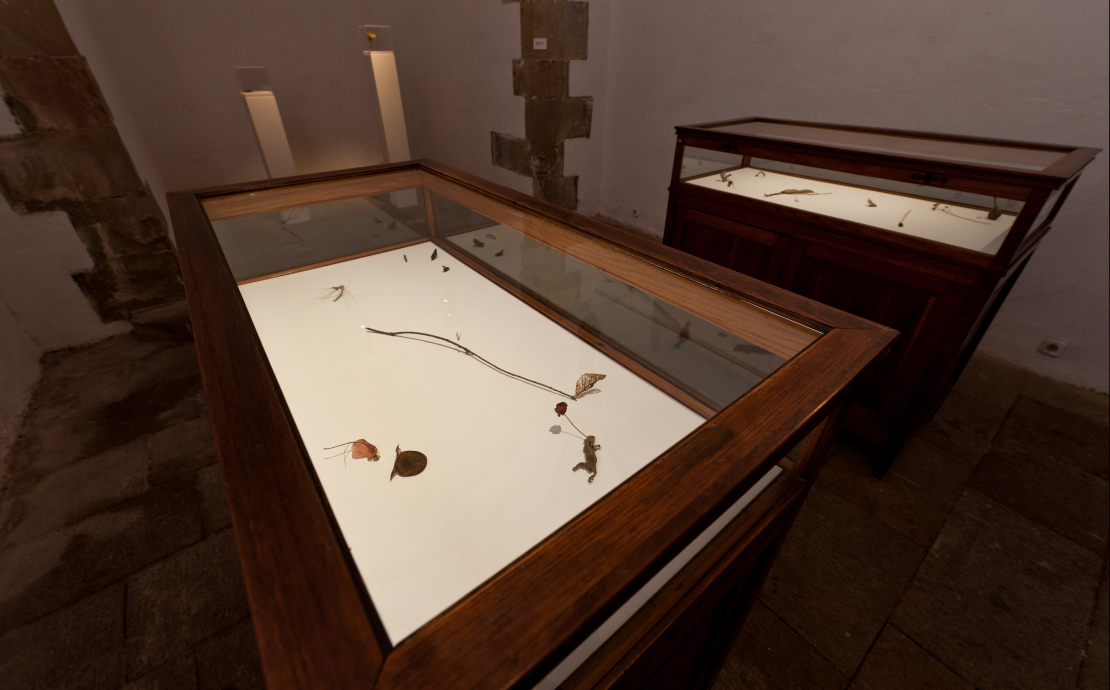 Sinapsis draws on risk and experimentation. Error, failure and imperfection are embraced. They create a tension that is useful. Unfinished work or work in progress implies the continuity of a process.

The selected works provide an overview of the Escola Massana based on projects that go beyond basic academic expectations. Networks of interaction, the human body, memory, space, place, scale, iconography: themes that have been explored countless times, interpreted here by artists, illustrators, designers and jewellers at the threshold of their creative careers. The first piece in Sinapsis pays homage to the transfer of knowledge between women. Jacinta the shepherdess showed Paula Arias how to knit using five needles. With this new-found knowledge, she embarked on the creation of a textile piece of sculptural dimensions. En la memoria (In Memories) by Paula Arias is unfinished. Memory and knowledge are constructed concepts.

En la memoria interprets the female form using a technique associated with femininity. Mr. Punch, on the other hand, the protagonist of the comic book written and illustrated by Anselm Solsona, represents the obsolete masculinity of the late ‘70s and early ‘80s. The elegance of the monsieur, the sophisticated man of the late 60s and early 70s, is replaced with the monosyllabic grunts of hormonal freaks, tanks of testosterone with an appetite for destruction.

1.345 dies (1.345 Days) is an artwork inspired by relationships, a self-portrait based on the interaction with others. The 16m-long row of paint cans is a measure of the time that Alán Carrasco spent at the Escola Massana and offers different perspectives on human relationships, time and the construction of the self.

La Cadena (The Chain) is a closed circuit. The relationships that Nelly Van Oost established during the project are the project and find expression in the final piece. It is a work of relational art in which the result is determined by the contribution of others. 1.345 dies was realised in collaboration with people that Alán had specifically chosen. Although repetition is used in both cases, the results are very different. In 1.345 dies, the serial form stands in contrast to the colours hidden inside the paint cans, whereas La Cadena is made up of completely different elements that constitute a continuum.

Una obra metarreal (A Meta-real Artwork) by Robert Romeu i Lleixá employs repetition to create what could be called an anti-pictorial thesis. Content and representation are of secondary importance. There is a room and a painter painting. The set has more in common with time-lapse photography than anything generally associated with painting. Muybridge’s tenth of a second becomes the days and hours dedicated to a repetitive task in a specific location. The significance lies in the overall series, not in each individual painting. What is important is having painted them all.

The action recorded in Lo irrelevante de la distancia (The Irrelevance of Distance) by Gabriela Mínguez only becomes significant, because the artist carried it out. The first generation of inter-European exchange, the free transit between countries, cities and schools. Upon arriving in a country with a history shaped by diaspora and invasions, Gabriela Mínguez finds the same sofa in her Budapest apartment as she has at home in Barcelona. A household object becomes a symbol for homogenisation, the elimination of distance. Gabriela transports the sofa from Barcelona to Budapest and vice versa. One shot mirrors the other.

Noemi Vilaro’s mORaj, also filmed in Budapest, accomplishes the opposite. The minutest detail reveals the broadest meaning. The framing, image quality, location and the golden curtain are all carefully combined elements. Using a formal technique, the artist attempts to capture the subtlety of an atmosphere and evoke the intangible. The quality of light at a certain time of day. A suggestion of movement. Multiple temporalities.

Noemí Vilaró learned how to knit the golden curtain that appears in her video. En la memoria is based on the five-needle technique that Jacinta taught Paula Arias. Nathalie Schreckenberg gives special importance to the learning process and uses it as a tool in Piezas para hombro (Shoulder Pieces). She accepts the imperfection of the result and transforms inexperience and chance into resources at her disposal, initiating a new practice in the process.

If mORaj is linked to the density of seemingly empty spaces and their memory, Il susurro dell’ulivo (The Whisper of the Olive Tree) translates a similar preoccupation to nature, recreating the sound space of a two thousand year old olive tree. By recording the sounds of this monumental tree, Miquel Ollé creates an almost mystical space of transit and reflection.

Oceànica has a similar introspective atmosphere. In this case, the starting point is Esther Pi’s own body. If 1.345 dies is about the ‘self’ based on others, Oceànica provides a universal vision based on a specific, individual body. Using a mould, the artist created a piece in light and translucent gauze-like material that is ephemeral and fragile. Japanese paper falls apart and wrinkles easily and yet the piece has an expansive presence.

With Ver para leer (See to Read), Carles Piera uses an accumulation of objects to build a space. The objects literally have to be read; they serve as the medium comprising a visual, object-based publication. In contrast to the work of Noemí Vilaró and Miquel Ollé, this installation uses space not as a starting point, but as a playing field. Rather than leading
us to introspection, it becomes the representation of an inner state, unreal and nostalgic, whispering enigmatic stories into our ear.

In Selva Aparicio’s Transformaciones (Transformations) fiction is implicit in the work. No single narrative unites the pieces. The artist foregoes deception, motivated by a clear desire for reinvention. The pieces, composed of organic fragments, stand on their own, inviting the visitor to imagine their story. Each piece is made with the skill of a jeweller. The project is also a series, but each piece is unique and cannot be replicated. Ephemeral and fragile like Oceànica, an imaginary realm like Mr. Punch, these little chimeras are the result of combining pieces of other animals to create new, singular creatures.

Puzzles and secret languages are integral to Jose Antonio, the animation by Marta Vilches. The short film centres on the communication between two brothers who are a mirror image of each other. They suffer from Savant Syndrome and have spent their entire lives in an institution, incapable of interacting with anyone but each other. Physically identical and with twin visions of the outside world, they live a hermetic and completely intertwined life that is only open to them.

Remontoir by Judit Armengol is an animation that, like the exhibition itself, makes conceptual leaps between characters and ideas. Following the logic of dreams, a dancer becomes a bird, and a tree grows inside of your head.