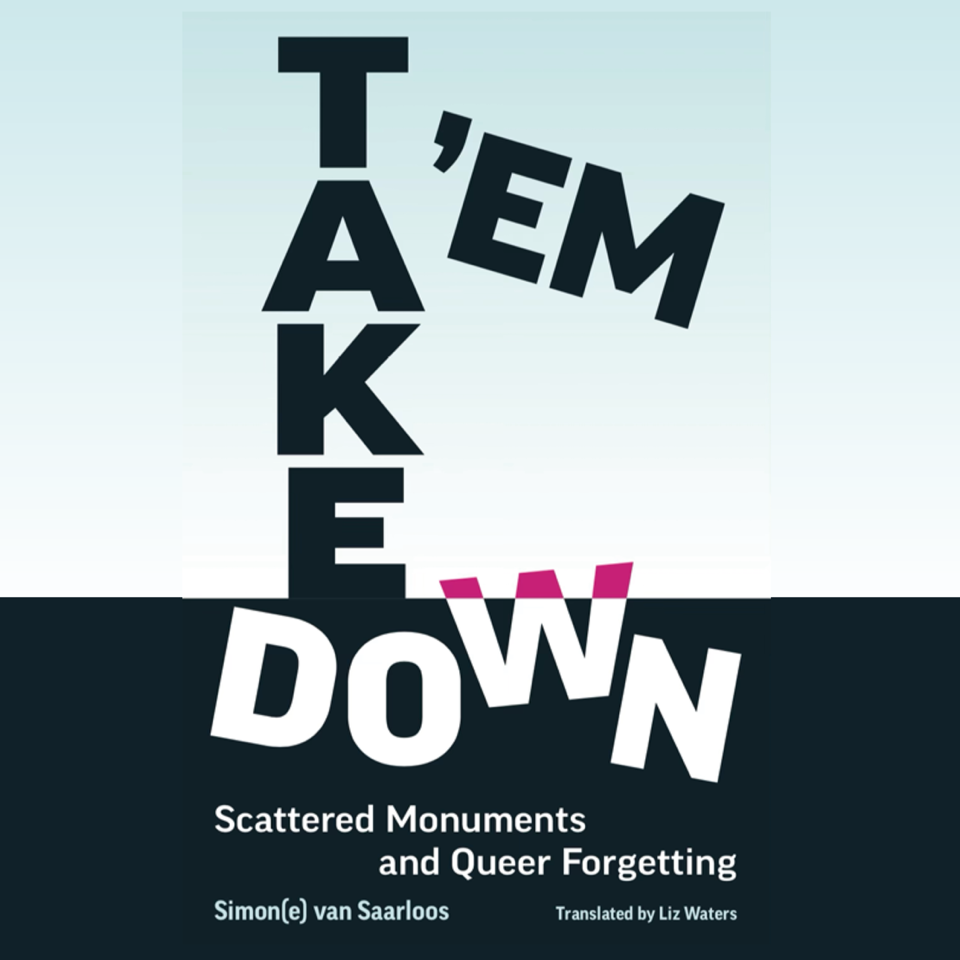 Presentation of the book Take ’Em Down. Scattered Monuments and Queer Forgetting and conversation

In Take ’Em Down Simon(e) van Saarloos draws inspiration from the lives of LGBT and queer people who have historically been rendered invisible. Van Saarloos demonstrates the power of forgetting and wonders whether it is possible to live without a past. At the same time, they criticise the way in which ‘white memory’ (including their own) treats some histories as self-evident while erasing others. They also question the normative architectures of commemoration. Lastly, Take ’Em Down does not deal with reconciliation through guilt and blame but with living disordered lives with pain and sorrow.

Simon(e) van Saarloos (1990) has published four books in Dutch, among them Playing Monogamy and Take ’Em Down. Scattered Monuments and Queer Forgetting, also published in English.

They work as an artist and have collaborated with others on numerous projects. They have recently presented Cruising Gezi Park (2020) at the Amsterdam Museum; the online exhibition and queer solidarity project Through the Window Project (2020, with the support of the Prince Claus Fund); the spread of a mo(nu)ment (2020, TAAK Mondriaan Foundation); and Apologies For Breaking In (2021, San Francisco Transgender Film Festival). They have presented their performance work at Hafen Frankfurt, Savvy (Berlin), Sonsbeek (Arnhem), the UN, TU Delft and GlitchRealm, among others.

They currently run *The Asterisk Conversations podcast and curate ABUNDANCE (‘We must bring about the end of the world as we know it’, Denise Ferreira da Silva) at Het HEM (Amsterdam). They have just moved to the United States to begin a PhD in Rhetoric at the University of California Berkeley.

Agustín Ortiz Herrera (1970) pursues his artistic practice in the realms of audiovisual, performance and installation art, which he uses to activate queer possibilities in a patriarchal-colonialist context dominated by audiovisual persuasion and the normative representation of memory. His work explores the semantic opportunities afforded by the narrative audiovisual in combination with experimentation in installation art. In his recent works, he develops a critical spirit aimed at deconstructing notions concerning historical patriarchal figures.

He studied fine art at the University of Barcelona (1998), film at The New School University, New York (2003) and a Master’s in Fine Art at Konstfack College of Arts, Stockholm (2016). His recent projects and exhibitions have been shown at the Arts Santa Mònica centre (The Tradition that Runs Through Us. Gnosis iluminada, 2022) and La Escocesa-CREAF (Future Forest Diorama, 2022), the CCCB (Science Friction, The Symbiotic Circle, 2021), as well as at The Green Parrot, Centre d’Art Maristany, Barcelona Loop Festival and La Capella (Naming, Possessing. Critique of Taxonomic Practice, 2020). In 2021, the MACBA Collection acquired his work Fungi Fantasy and their friends Crazy Bacteria.