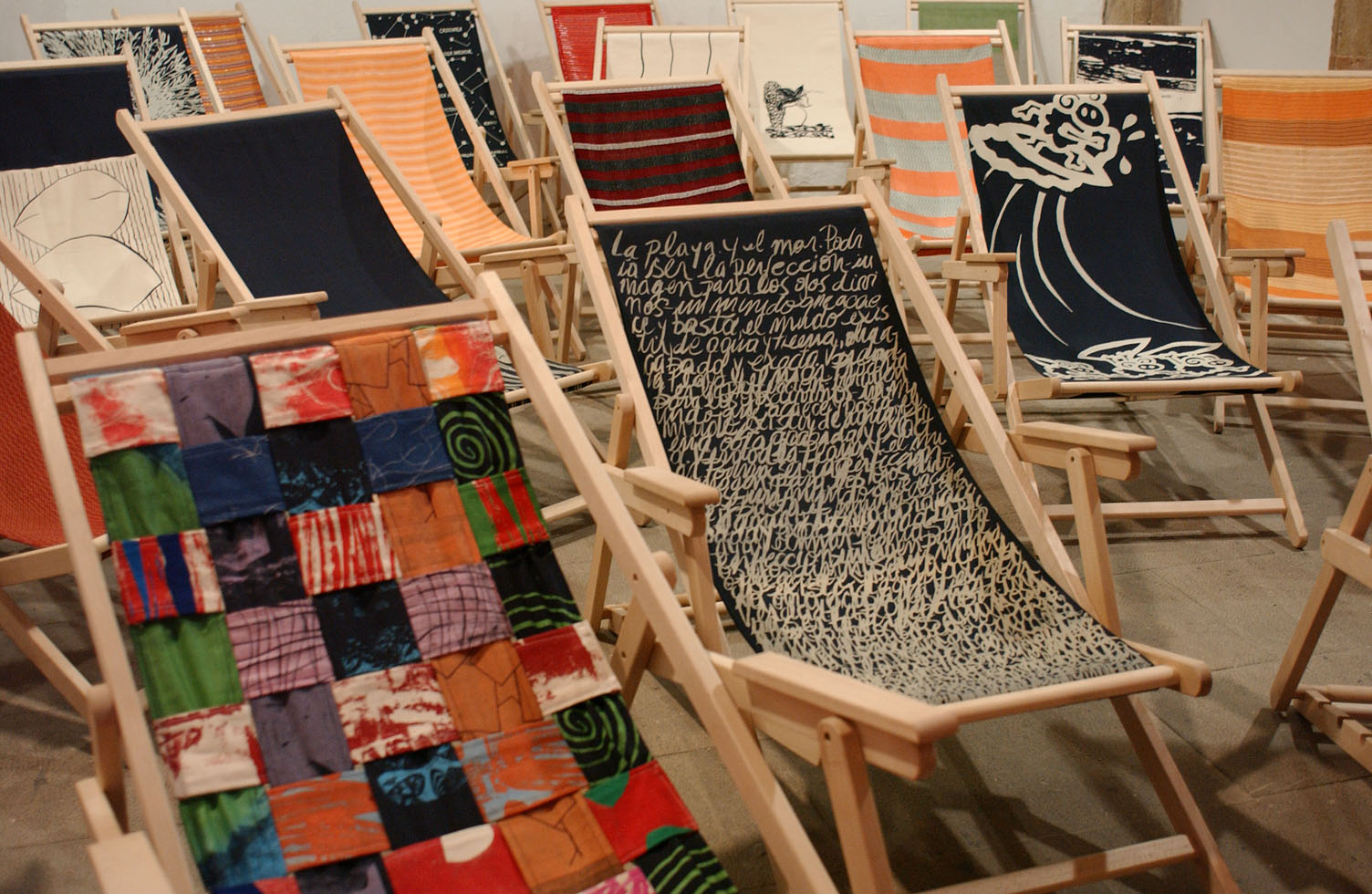 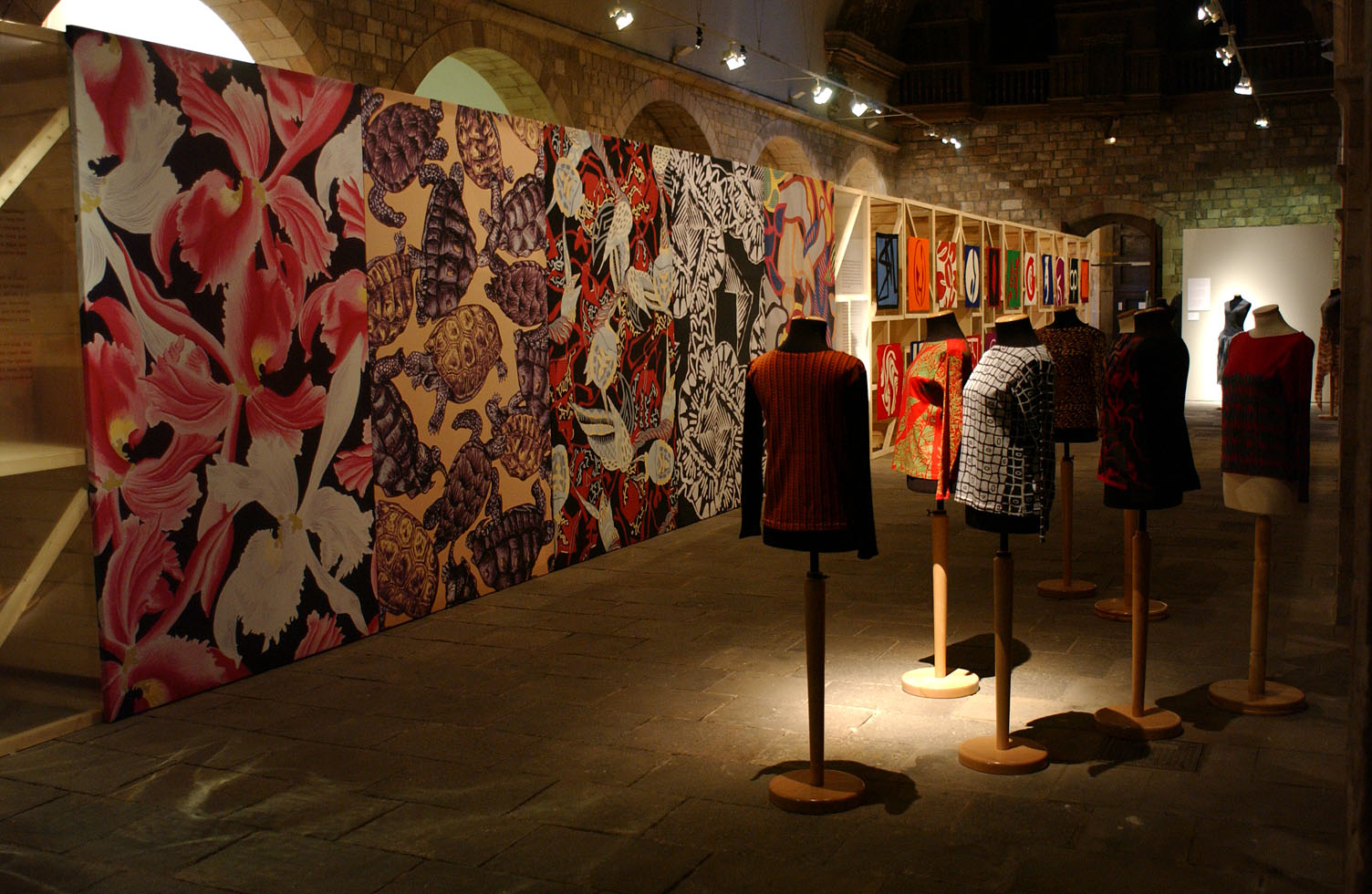 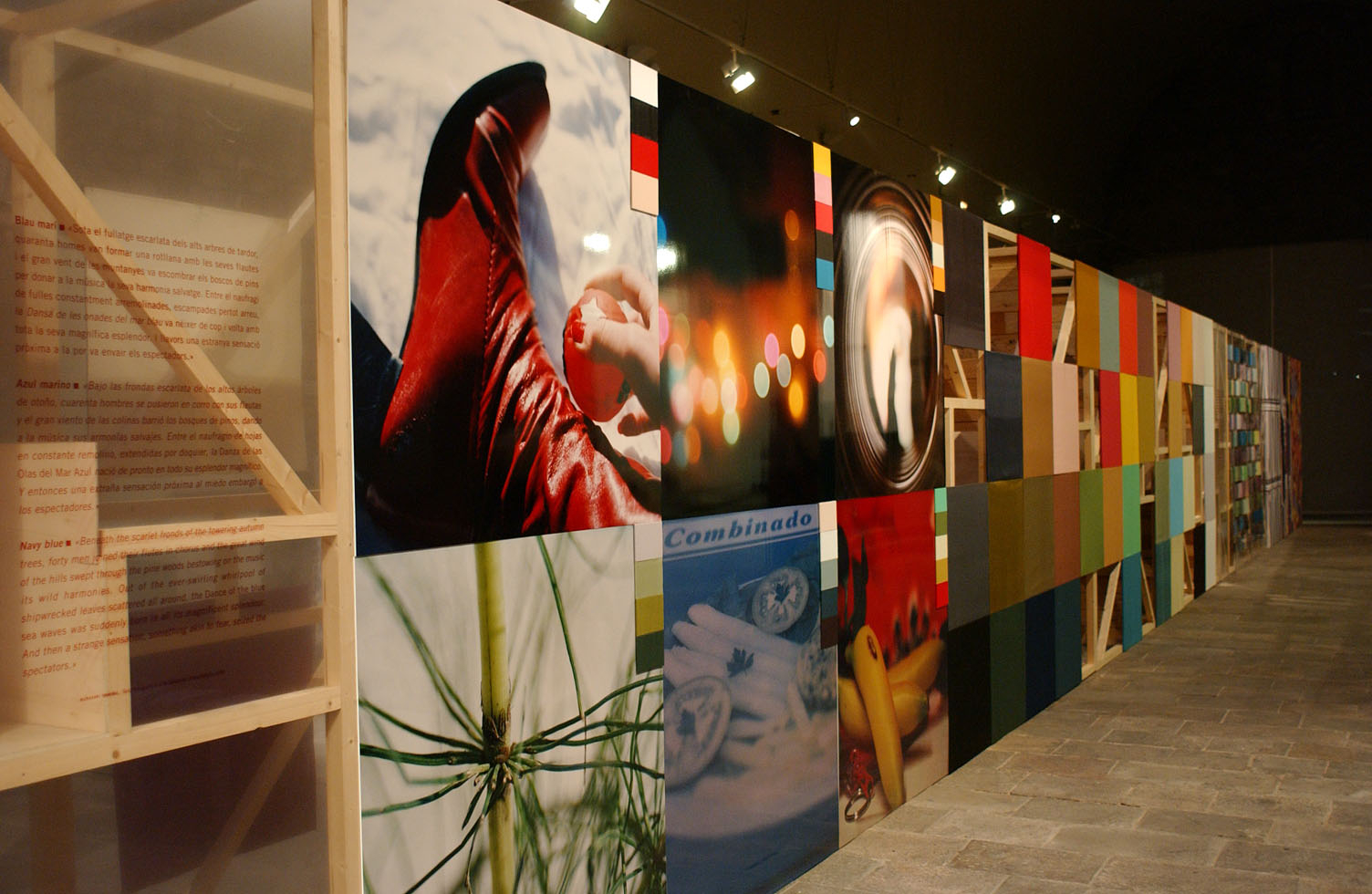 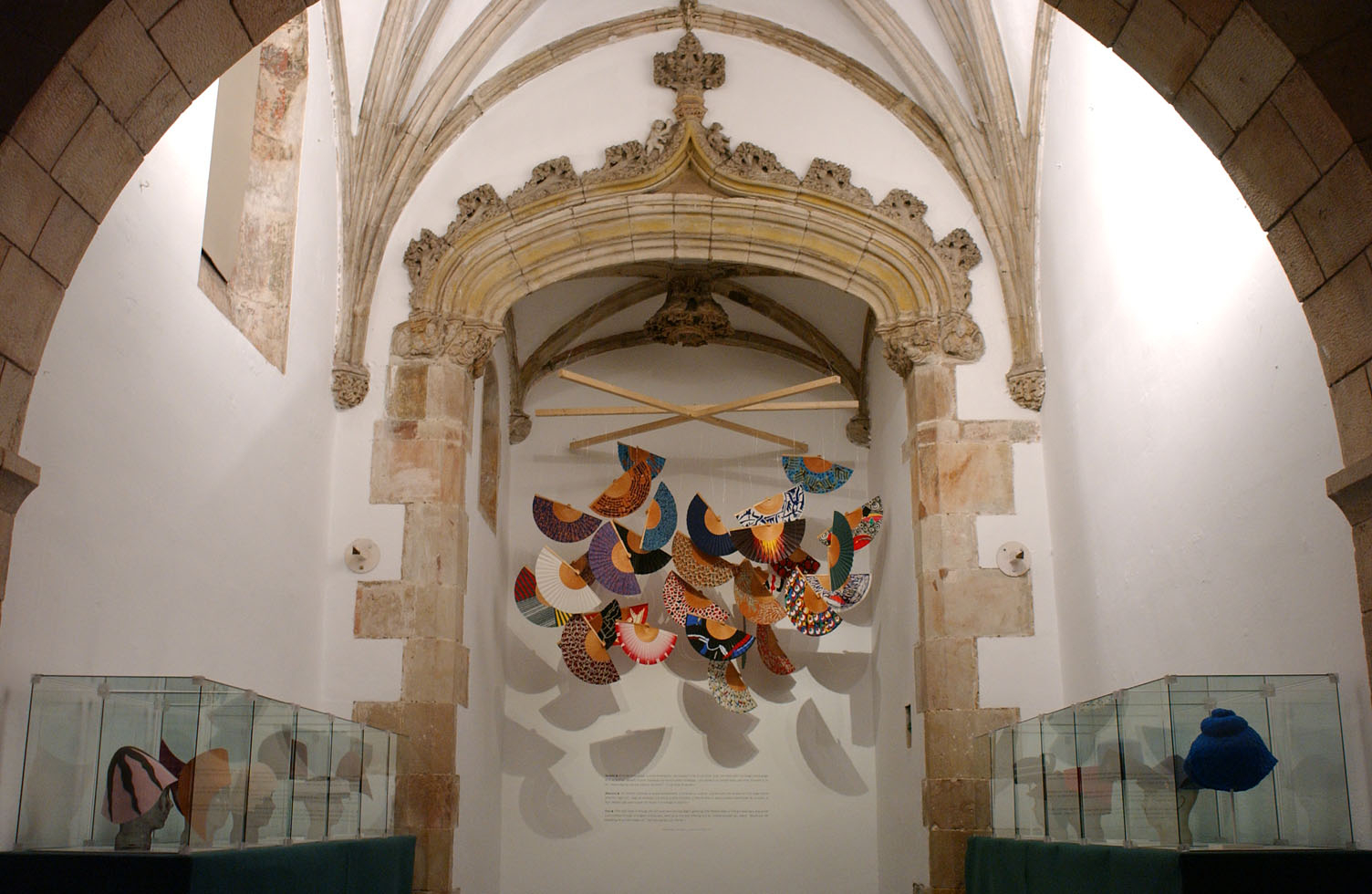 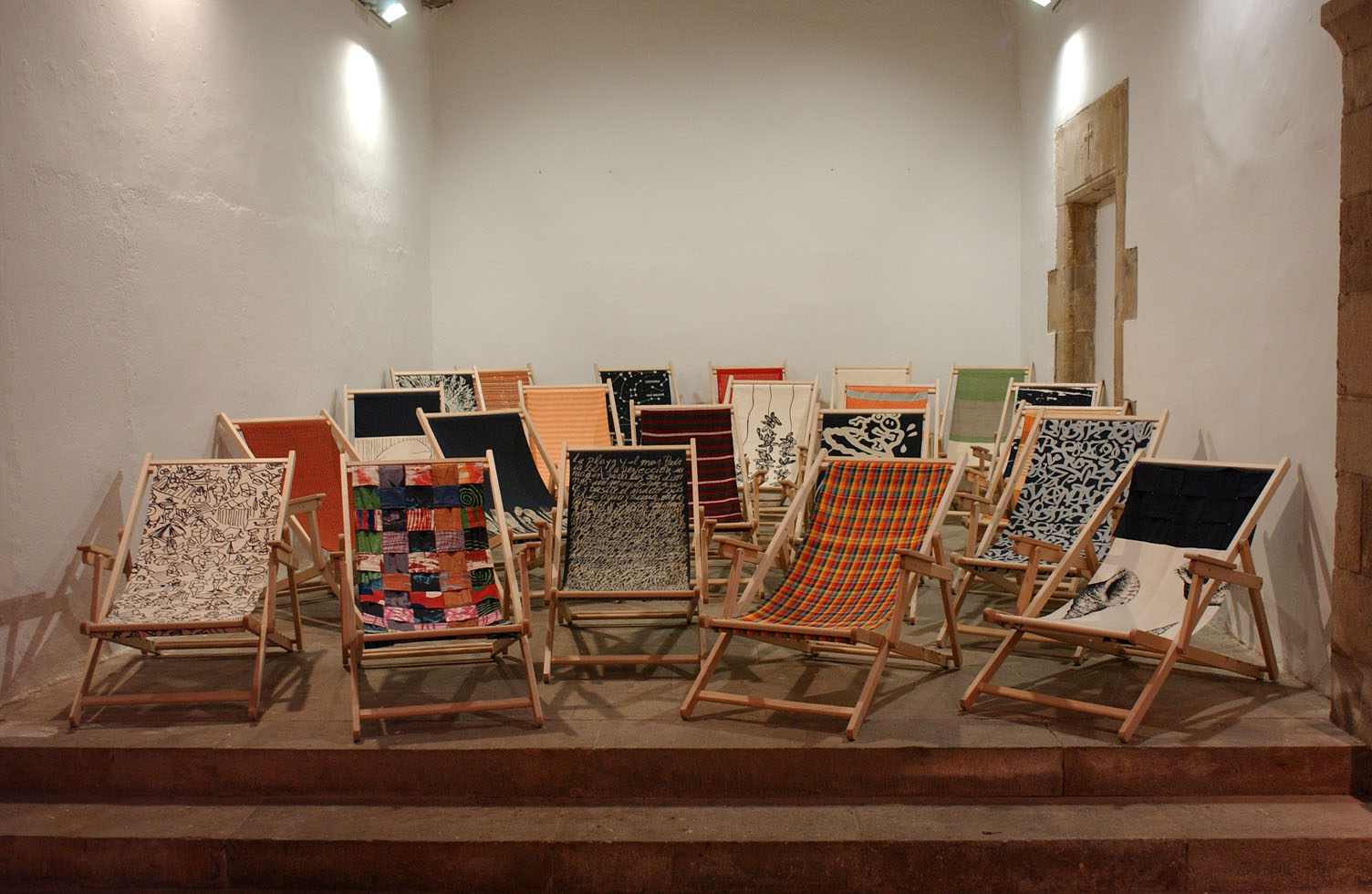 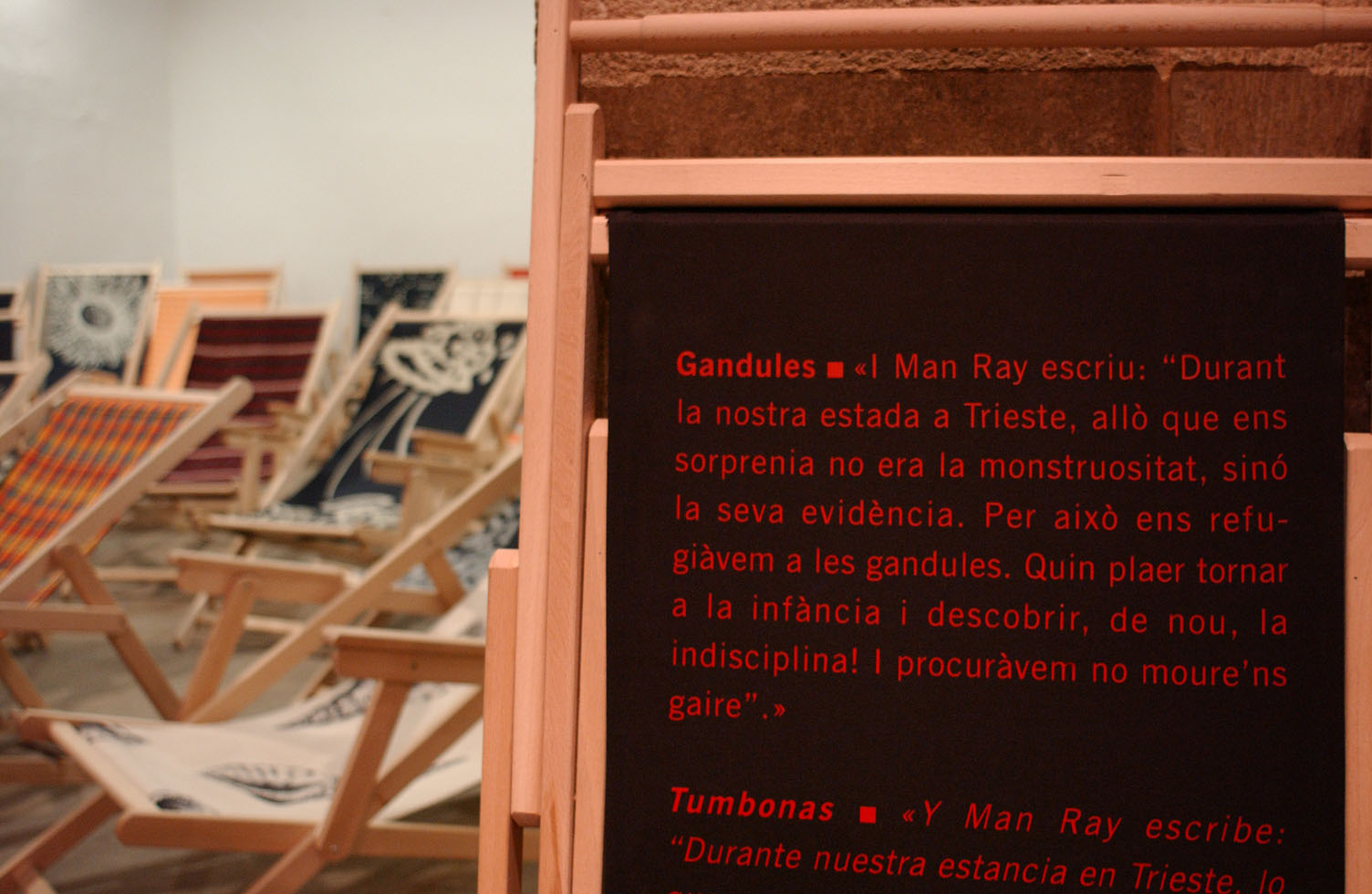 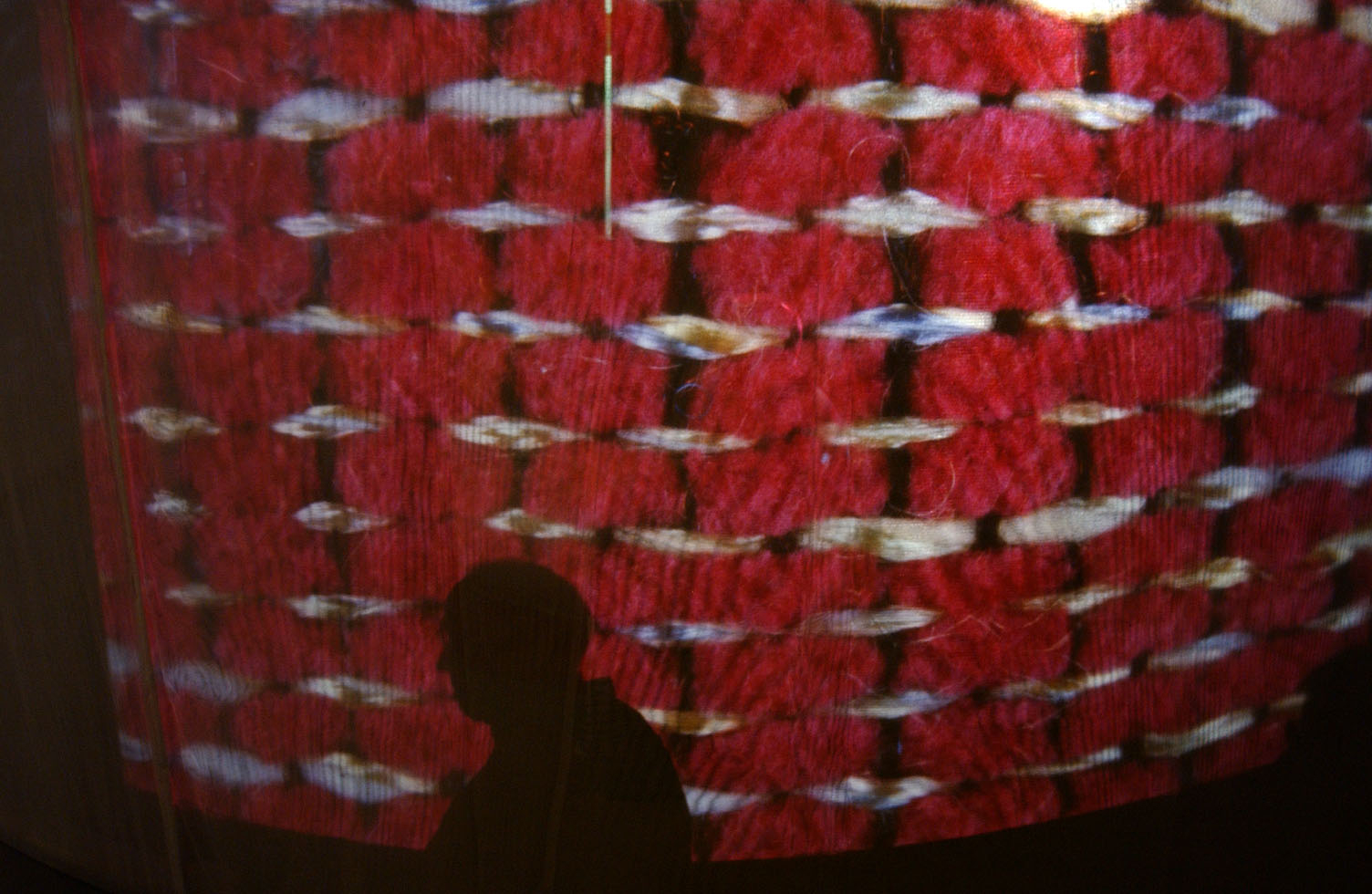 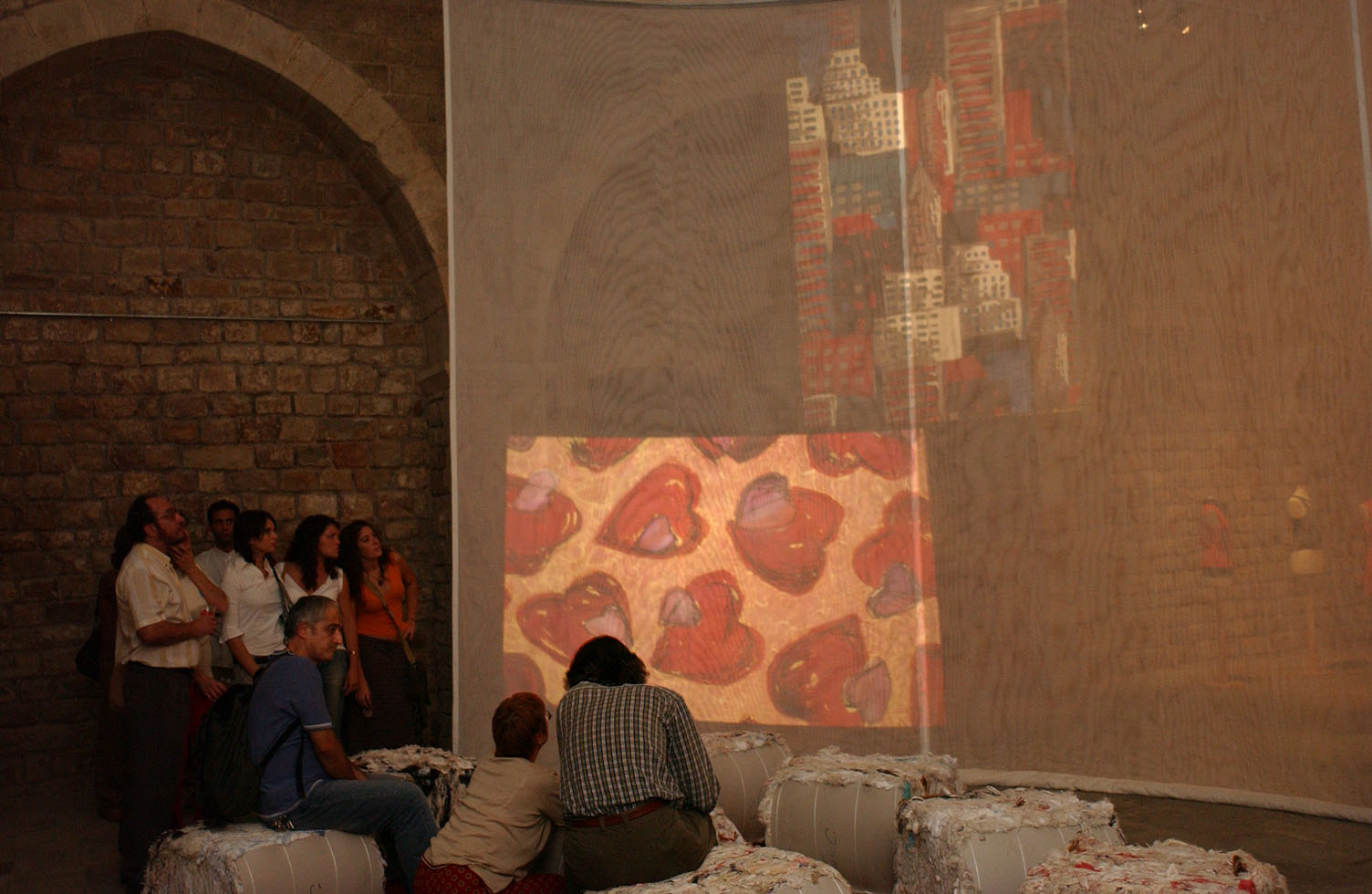 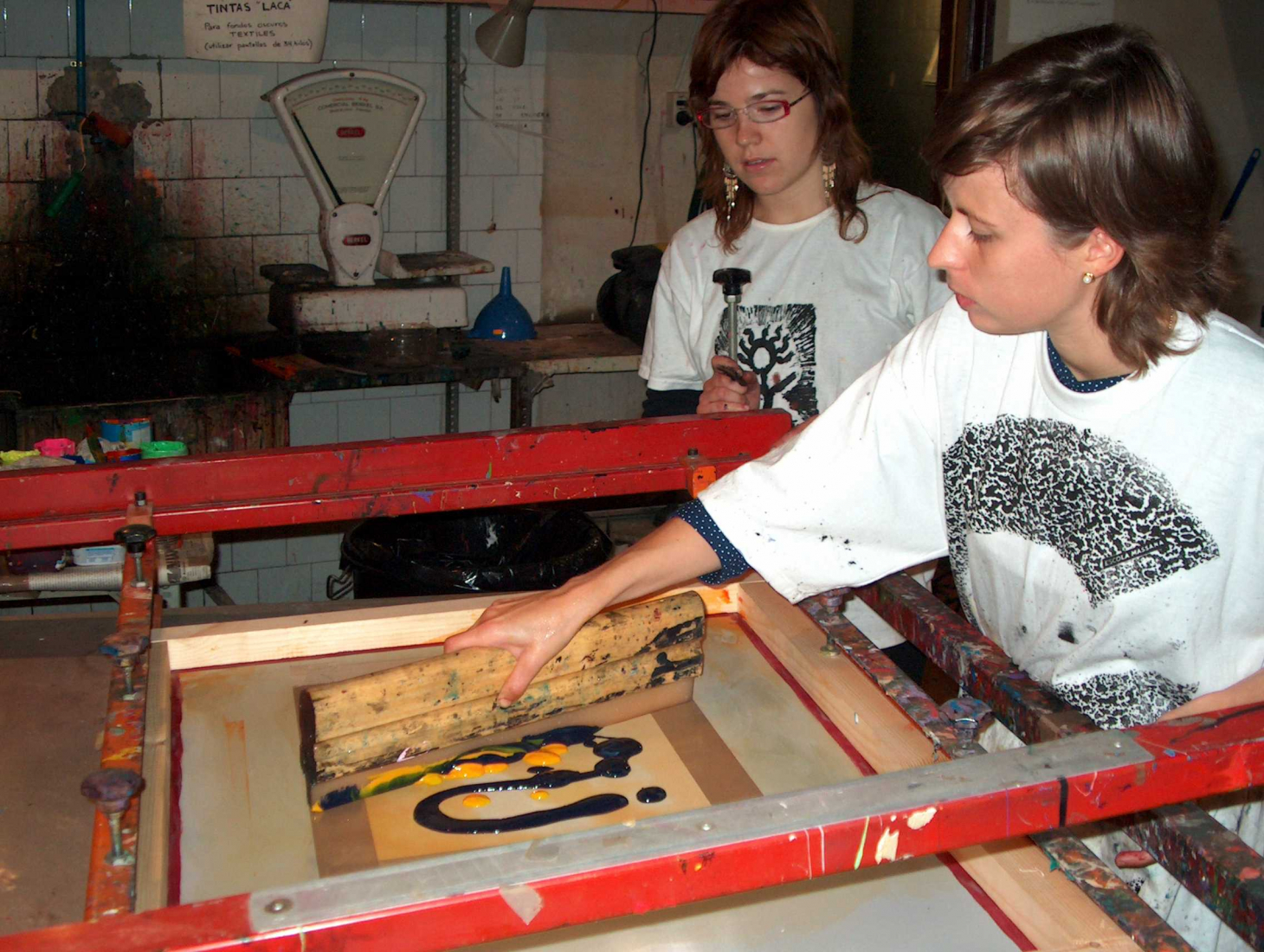 In this exhibition the Escola Massana presents a number of the works produced during the Higher Vocational Training course (CFS) in Textile Art. This course has an extensive history which begins in the former Fabric Printing section, a veritable goldmine of designers for the Catalan textile industry, powerhouse of educational activity and generator of an unfailing talent to organise exhibitions.
The works presented on this occasion demonstrate the enormous influence that such training can exercise in everyday life and place it firmly in the field of contemporary design, where it is evident in numerous fundamental areas of creative activity such as those relating to the body, with hats, dresses and shirts; space, with carpets and screens; objects, including deckchairs, accessories, bags, lamps and jewellery; and image, employing colour and the application of new methods.

One of the basic functions of contemporary design is that of analysis and understanding of human needs, leading to the creation of new behavioural attitudes. This is no new challenge to textile art; the production of second skins for our body has always clearly involved an element of protection but has, at the same time, constantly brought about the creation of complex symbolic meanings which have transformed the collective mentality.

Thus day-to-day life, which is the ultimate destiny of the creative capabilities of textile art, is strengthened by being a process which reveals the very matrix of the order and origin of all that is created. So spinning, sewing, embroidery, crochet and weaving, between the warp and the weft, are ancient technological operations which bear the seal of all that, while being of utmost utility, is revealed as symbolic and is transformed into the origin and a good deal of the content of book of the world, the real meaning of which we should all learn to read. The thread and its interweaving designate physically all that should be united; thus in many and varied cultures thread is the most appropriate word to use when referring to both spiritual transmission and life itself.

Contemporary science and theoretical physics have expressed interest in the invisible links that connect objects and observers, unable to avoid the image of the thread as the perfect example of how our minds and the world are made up of the same elements and that everything depends on the scale on which we look at things for the differences to become obvious. In his studies on fractality, Benoît Mandelbrot is unable to avoid the thread's exemplary force and defends the thesis that the physical dimension of this element is the result of subjective appreciations and the varying degrees of resolution inherent in the way we see it. He points out that a ball 10 centimetres in diameter made up of 1 millimetre-thick thread latently holds various different dimensions. From a distance of 10 metres it is a dot, from 10 centimetres it is a three-dimensional hairy ball, from 10 millimetres it is a collection of threads, from 0.1 of a millimetre each thread is a column, from 0.01 millimetres each column is transformed into thread-like fibres and so on, successively. Mandelbrot's explanation of the fractal object is centred on the thread and he did not choose this line of argument by chance. On the contrary, he knows that the thread, the raw material of textile art, constitutes the best way of explaining that which the scientist knows better than anyone, which is that, despite the fact that in each phase of observation of the nature of matter it seems that great and highly varied leaps are taken, it is beyond all doubt that there exists another thread, invisible and difficult to weave, that draws together all those involved however different they may seem to us.

In this Year of Design, the Escola Massana wishes to contribute to the creation of a transforming alchemy based on textile art, now that it has been firmly established that this art form has the capability, within the X and Y co-ordinates, between the vertical and the horizontal weft, to capture with a spider-like strategy each and every one of the parcels of reality, journeying through the body towards infinity and irradiating in a thread-like manner an energy which renews not only the attitude but also the very life of men and women.

"Beneath the scarlet fronds of the towering autumn trees, forty men joined their flutes in chorus and the great wind of the hills swept through the pine woods bestowing on the music its wild harmonies. Out of the ever-swirling whirlpool of shipwrecked leaves scattered all around, the Dance of the blue sea waves was suddenly born in all its magnificent splendour. And then a strange sensation, something akin to fear, seized the spectators."

DECKCHAIRS
"And Man Ray wrote, 'During our stay in Trieste, what shocked us was not its monstrousness but rather the evidence of it. That's why we took refuge on the deckchairs. How pleasant it was to return to our childhood and rediscover indiscipline! Of course we tried not to move too much'."

HATS
"[…] I think, I think that a long long time ago, I don't remember where, I picked up the wrong hat by mistake and was amazed at how well it suited me, having as I do such a peculiarly shaped head.
So I looked inside the hat and then … Yes, yes, there, in gold-coloured letters was the label on the white hat-lining: Athanasius Pernath. The hat scared me and filled me with fear, but I didn't know why."

CARPETS
"I can still see him there, on my carpet, lit by the fire in the hearth, with his mottled jacket and beaming face, anxious to appear tender towards my youth."

FANS
"The man came in through the half-open door and had begun gathering [the flowers] when a little girl wearing a long yellow tunic entered through an elegant sliding door, went up to him and, offering him an incense-scented fan, asked, "Would you like something to put the flowers in?" She then handed him the fan."

DRESSES
"A description of how people dress can become tiresome, but in a story the first details to be explained about the characters is, invariably, what they are wearing […] she was wearing a dark violet kimono, unlined, and a sort of shawl was draped over the shoulders […] her friend seated in front of her. Her dress was made of lightweight, white material and from her shoulders hung a casually worn cloak, embroidered with red and blue flowers. The front of her dress was untied and revealed her neck and naked breasts. The light, scarlet belt that fastened her suit could also be seen."

SCARVES
"Hervé Joncour felt the water slide over his body, first down his legs and then along his arms and onto his chest. Water like oil. And a strange silence all around him. He felt the lightness of a silk veil that settled over him. And a woman's hand, drying him, caressing every inch of his skin; those wonderful hands and that scarf woven out of nothing."

SCREENS
"Anxious to see her, even when she was accompanied by someone else, Genji slipped out of his hiding place and walked through the two curtains; the partition through which the little boy had entered was still open and he was able to see down the entire length of the corridor to the room at the end. The screen in front of the entrance to this room was partially folded and the excessive heat had led to the tapestry divan covers being removed for the sake of comfort. His vantage point thus commanded all he needed to see."

FELT
"A description of how people dress can become tiresome, but in a story the first details to be explained about the characters is, invariably, what they are wearing […] she was wearing a dark violet kimono, unlined, and a sort of shawl was draped over the shoulders […] her friend seated in front of her. Her dress was made of lightweight, white material and from her shoulders hung a casually worn cloak, embroidered with red and blue flowers. The front of her dress was untied and revealed her neck and naked breasts. The light, scarlet belt that fastened her suit could also be seen."

INDIGO BLUE
"In 1996 Peter Greenaway made a film which he called The Pillow Book, based on the title, and in part on the story, of an autobiographical literary work written in Japan by Princess Sei Sho Nagon over a thousand years ago. In the book, which is set out in different sections, she explains her likes and dislikes in a simple, feminine style with a heavy input of poetry. Among the elegant things she likes may be found: cutting ice in a silver bowl, snow-covered cherry trees, a little boy eating strawberries, a bunch of wisterias, sleeping in a room with a light scent of incense… And among those that make her heart race: indigo blue silks, indigo blue flowers, indigo blue fabrics and, above all, indigo paper."