Immortality for All! — A film trilogy on Russian Cosmism

Anton Vidokle. Immortality for All!
A film trilogy on Russian Cosmism

The screening will be accompanied by a conversation between Anton Vidokle and Caterina Almirall.

In this cinematographic project in three parts, the artist Anton Vidokle demonstrates the influence of Cosmism in the 20th century, and raises its relevance in the present.

The cultural movement known as Russian Cosmism, promoted by the philosopher Nikolai Fedorov in the late nineteenth century, emerged in Russia before the October Revolution of 1917. Based on a broad theory of natural philosophy, this movement had the utopian goal of not only reforming art but also creating a new world. The ideological pillars of Cosmism were the end of death, resurrection and free movement within the cosmic space. Anton Vidokle, an artist and editor of the E-Flux digital magazine (Russia, 1965), recovers the foundations of cosmotic thinking and captures the remains of Soviet art and architecture in a ninety-six minute video-trilogy: from from the desolate steppes of Kazakhstan to the museums of Moscow. The compositions of John Cale and Éliane Radigue constitute the musical background of this imaginary apparently suspended in time.

Activity organised by Loop Festival in collaboration with Zumzeig Cinema, within the curatorial project "Become immortal and then dying" by Caterina Almirall, which will be exhibited in La Capella between October 2020 and January 2021.

With the collaboration of: 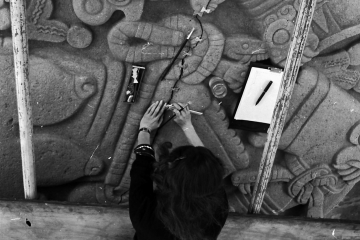