The situation documented in Xavier Ristol’s video happened during a creative workshop at L’Estruch (Sabadell). Just in front of the warehouses used by the artists is a huge vacant lot owned by the council, which has implacably resisted the area’s inexorable urban growth. Originating from the premonition that this spot bereft of any interest could harbour some element, the artist initiated an archaeological research project, using some string and six stakes to mark off a prospecting area. The next step was to employ two labourers from Georgia who, without any prior explanation would spend two days excavating the defined area, until the risk of collapse forced the works to be stopped. The result is a video work in three acts, a false documentary which sinks its roots into the very heart of the genre.

Xavier Ristol’s work stems from a fortuitous, personal impulse to construct, in a humorous vein, a fictionalised deployment of the facts, where real events provide an initial substratum on which to work. Georgia & Other Questions stems from strategies of verisimilitude to the audiovisual account, exploited to its ultimate instance, yet not so far as to insist on that reality but to draw us into the territory of the Other, of the immigrant from the East, the day labourer, to create a quotidian reality melded through experience. The two key characters, Temur and Goga, rebel against a management that has sentenced them to the Sisyphean fate of the unfulfilled search. This reality transmuted into fiction, the theme of the unproductive search and the resulting document which is generated in a space where there is nothing to see, function as an unquiet metaphor surrounding the creative process itself, in artistic as much as theatrical or audiovisual terms. 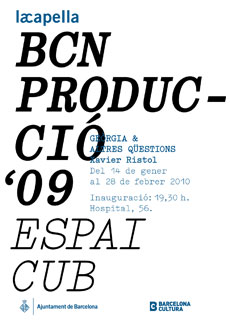