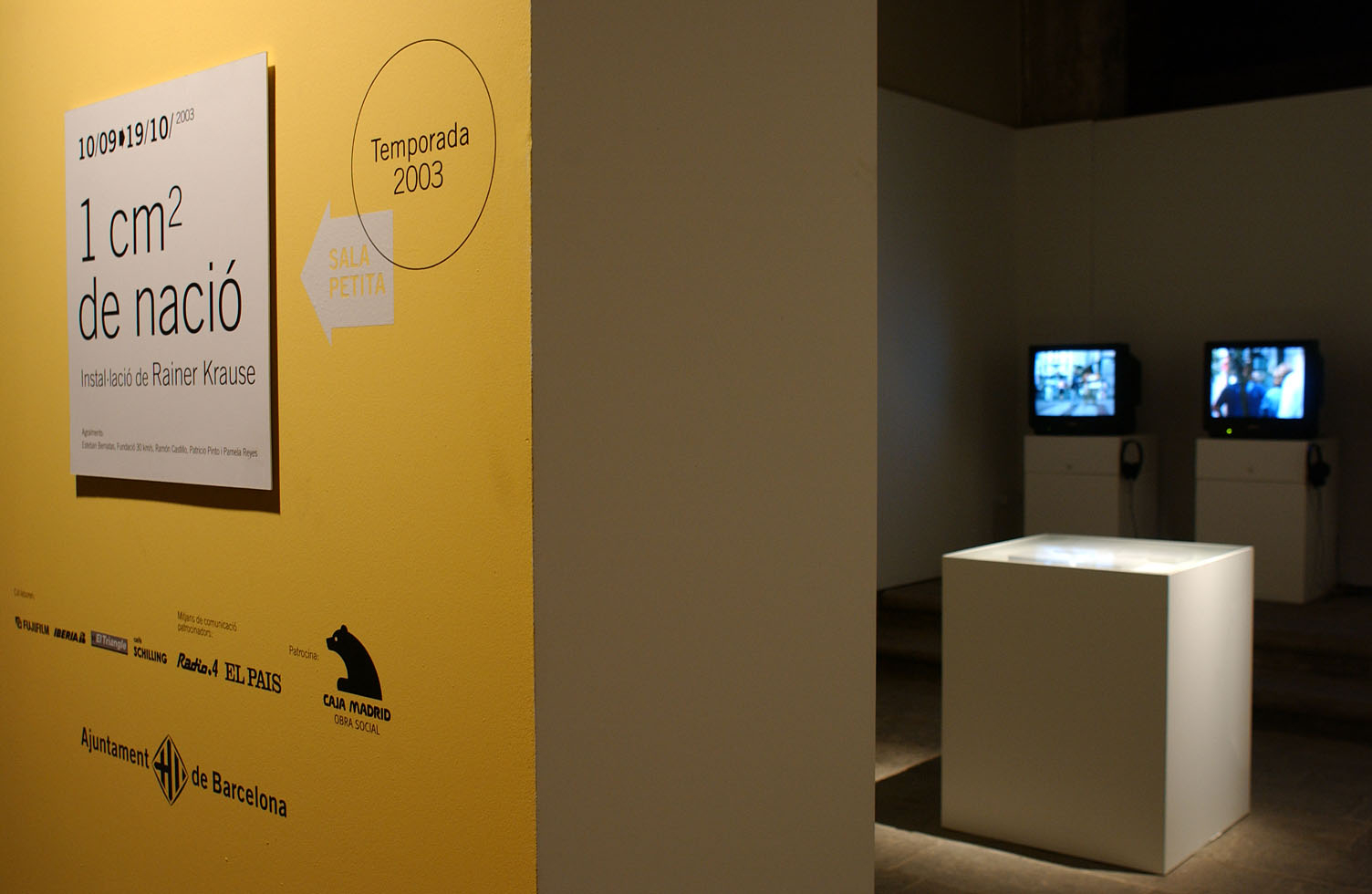 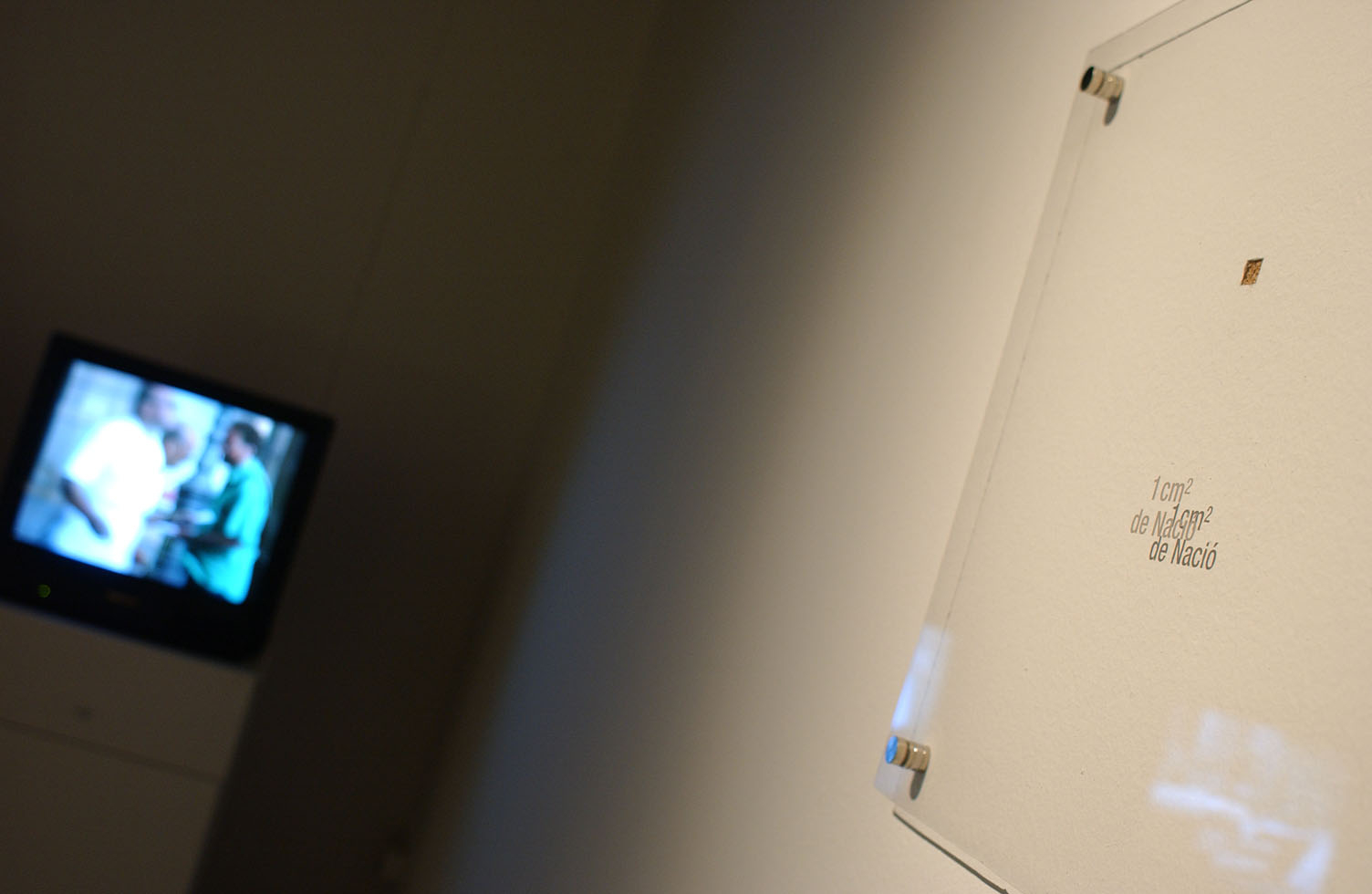 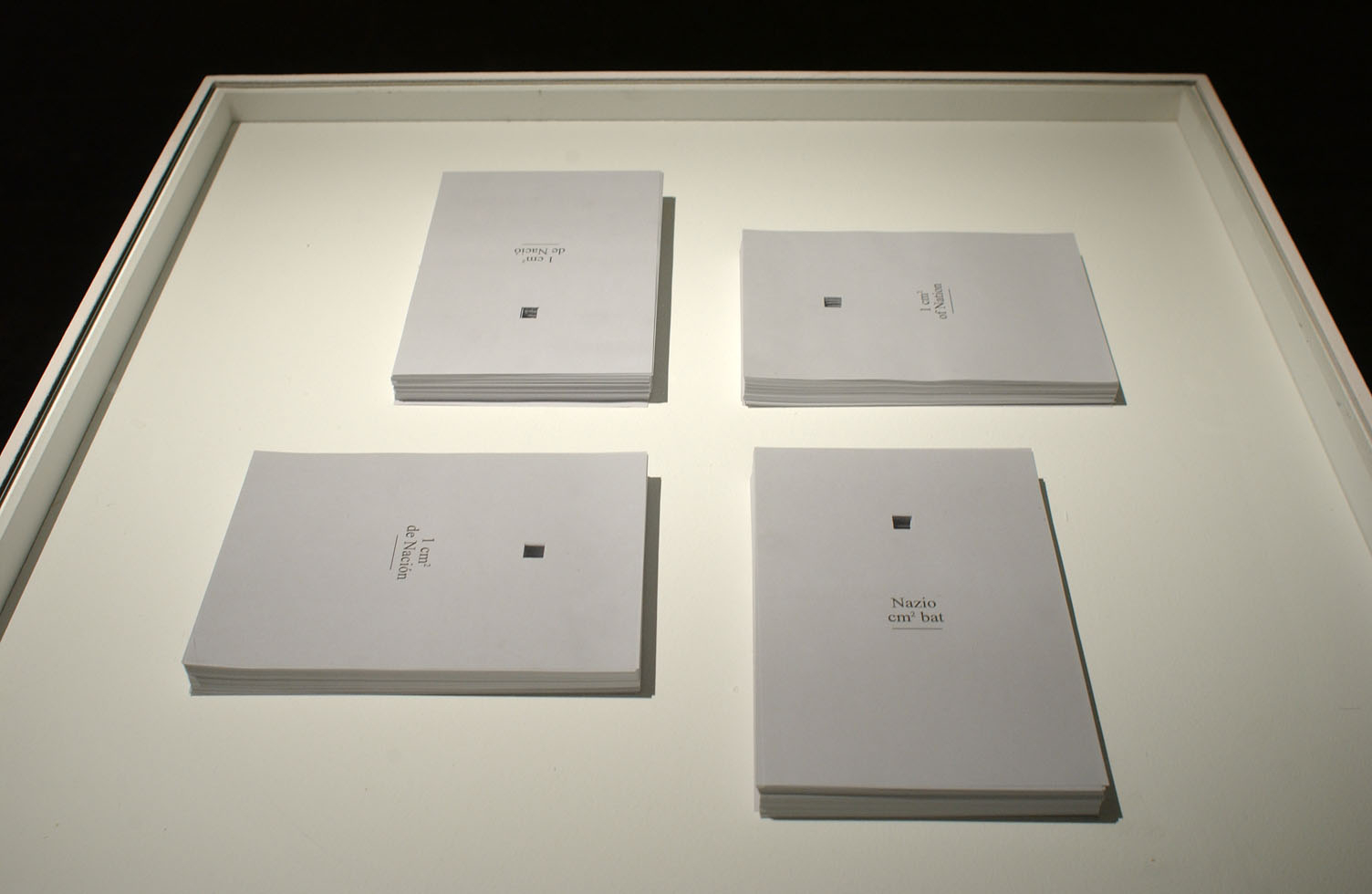 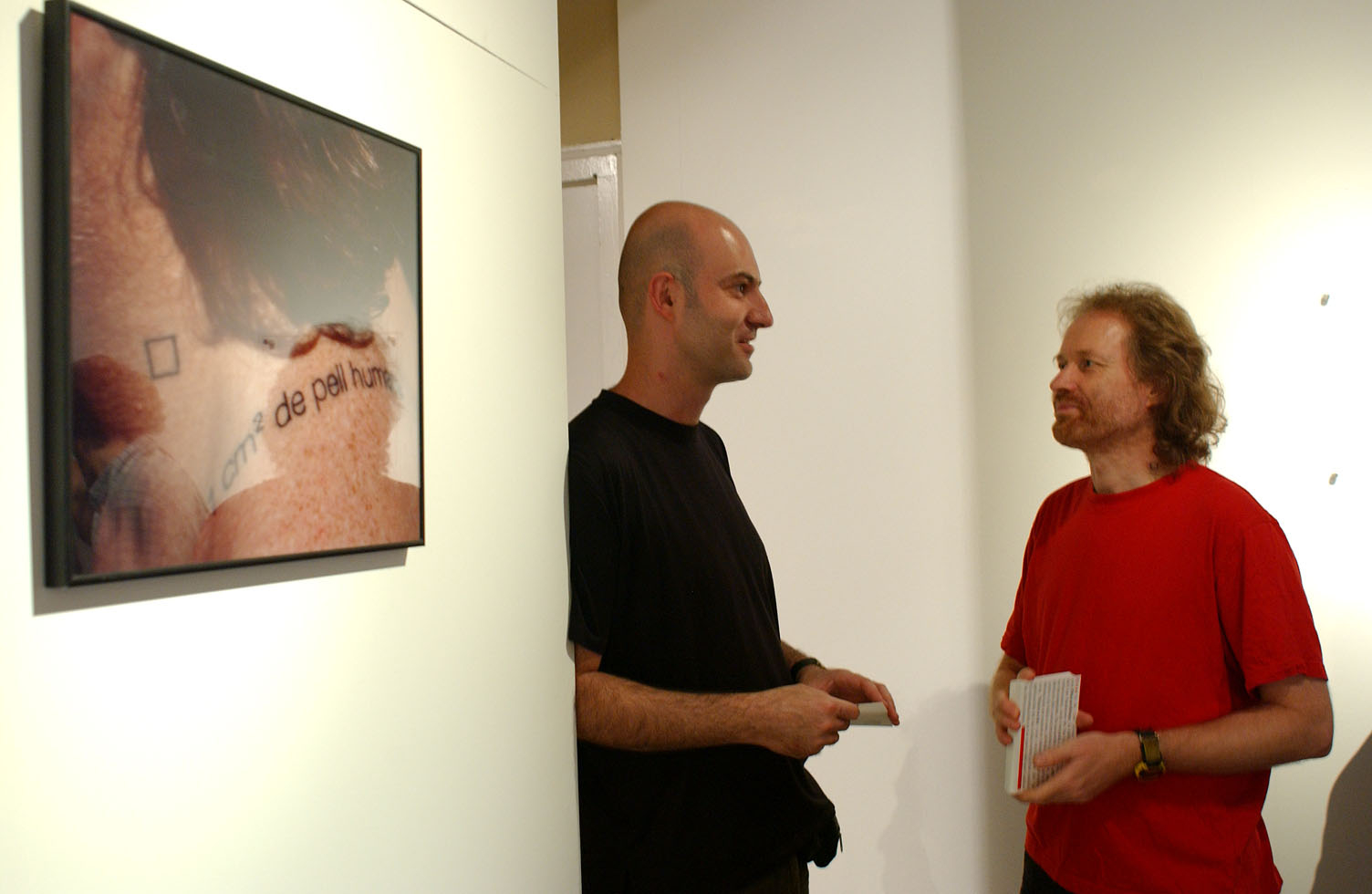 ...the art of cartography achieved such perfection that the map of just one province covered the whole city, and the map of the Empire, an entire province...

Indeed, such were the demands of the cartographers to whom Borges refers that they ended up making a map of the Empire that was so large that it coincided exactly with the point from which it was being scrutinized. So, is it possible to think that a map is in itself the territory? And if it is not what it says, it is reminiscent of the paradox of René Magritte and the pipe, in this case saying, "This map is not the territory"…

Rainer Krause's work entitled, "1 cm2 of Nation" alludes to this paradox between text and image, representation and presentation, and map, nation and territory. There are two parts to the project, both of which are connected with one special geography: the political geography of Spain and the artist's skin.

In the first part of the project, the artist carried out an experiment in which he expounded his critical and ironic thoughts on the idea of nation as a unit of identity associated with a culture, a memory and a specific territory. He put his theory to the test by travelling to Spain's geographical extremes where, in each of the four chosen cities, he distributed paper flyers with one side coloured grey and a cut-out in the middle measuring one square centimetre through which to look, as if it were a small window or vantage point which framed reality. This geometric, regulated perforation was accompanied by a text which read, "1 cm2 of Nation", but in each chosen city it was written in a different language, namely Catalan, Spanish, English and Basque. As well as handing out the flyers2 in the busiest spot in the town he also made an audiovisual recording of the event which will be presented during the exhibition using four televisions3, as if they were four perforations showing specific experiences which occurred in specific times and places.

If we agree that territoriality defined from the scientific point of view corresponds to an innate predisposition to defend certain areas of terrain exploited by one particular species, then we could imagine that Krause obliges us to think about how entropic and occasionally absurd cultural, ethnic, idiomatic and territorial limits can become. Their value however resides in the fact that they confirm that time and place are essential co-ordinates to establish the occupation and dominion of a territory. The exclusive predomination of occupation that usually structures the memory of societies and countries must be defended on the basis of the establishment of a territory which is being claimed as "owned".
Thus, if a territory may be occupied it is because it has previously been delimited and defended. In the history of each of the chosen cities there has been a weave of conflicts which have been resolved, silenced or remain active. Distribution of the flyers enabled the artist to see for himself how the smallest of semantic provocations brought about a reaction involving so many definitions and interpretations of the meaning of "1 cm2 of Nation" that, on some occasions, he was obliged to leave. At the same time however, this became another way of demonstrating how the mere mention of the word nation in the area's native language inevitably activated a collective conscience associated with "identity and territory" and, hence, the distances and vicinities of defence that are established with respect to any "foreigner". What Rainer Krause does, in an allegorical sense, is to reproduce territorial behaviours and the processes of territorialization and deterritorialization of today's Spanish "nation".

As an in situ presentation, Krause will recreate "1 cm2 of Nation" on two walls in La Capella in four brief direct interventions (1 x 1 cm) on two facing walls (two interventions on each side). They will refer to topics relating to the local culture of the exhibition venue (Barcelona, Catalonia): geographical location (the land), history (the monument), language and national identification (the flag).

If in the first part the artist travelled through different areas of a highly varied political and cultural geography, in the second part, entitled "1 cm2 of Human Skin" , he inverts the movement and instead of travelling to his places of work he brings different geographies and cultures to his own body, in the shape of three tattoos. Once again, the unit of measurement is the square centimetre which, on this occasion, is marked by means of a tattoo on the artist's skin. A square is delineated which establishes a territory on his body, an exclusive zone which, though nothing more than a square of black lines on white skin, establishes an inside and an outside. Nonetheless, Rainer finds it necessary to delimit the sense of the mark and thus alongside each square centimetre there will be a tattooed text in one of three different languages: Catalan, Spanish and German. In this case there will no longer be a territory delimited by history, traditions and facts, with stability and permanence ; the place of origin is the place to which one returns: that is the permanence and the endurance of the territory. However, by tattooing a territory on his skin, which is usually associated with mutability and movement, a paradox is produced, because in this case the territory is announced as being human skin, the universal condition of mutability versus the text which, despite attributing the same meaning, "1 cm2 of Human Skin", in each language designates a territory which, at that moment, ceases to be stable and motionless and moves with the skin, which now becomes the only thing that remains.

Symbolically, Rainer Krause's body will be transformed into a physical, tectonic map of his own living migration; his skin will trace a route whose cartography will be interwoven and entwined beyond the epidermis, as if he were a universal citizen with a movable, root-like residence, where there are no hierarchies between territories or cultures and where the beginning and the end of each nation will coincide with the three-dimensional observation of the traveller.